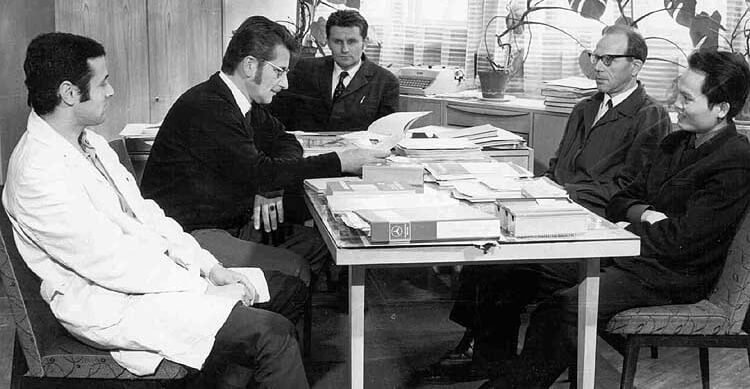 The predecessor of our department is the IV. Department of Mechanical Engineering headed by Ede Kund. He became an “extraordinary university professor” in 1938, and a year later he also received the title of “public ordinary” teacher. According to the 1945/46 yearbook searched by a colleague of László Muzsnay, the department then had five lecturers: Alajos Lancsarics, an unpaid assistant professor, Tivadar Kiss, an unpaid teaching assistant, Lajos Puhr, a paid trainee, and Vida Vid, an unpaid trainee. Later, the teaching staff was expanded with seven teaching assistants, including Zoltán Mede, István Ratskó and József Takács.

In October 1948, the article of Artúr Balogh was published in the “Autó” magazine, which is the predecessor of today’s “Autósélet” magazine. In this article, he necessitated the start of the “automotive engineer” training and the establishment of the automotive department. According to an article in December 1949 in the Autó, this happened: the IV. Department of Mechanical Engineering, which was led by the retiring Ede Kund, was renamed to Gas Machines and Cars.

Jurek Aurél took over the management of the department as Acting Head of Department, and from September 1950 as a university professor. The teaching staff was supplemented by such well-known people as György Dezsényi, Károly Gampe and Sándor Terplán. By the way, this year is also important because it was the first time in Hungary that automotive engineering diplomas were awarded: 16 colleagues received it. The first one was received by Tamás Szirtes, and a copy of the degree can be seen in the mini-museum on the ground floor of building J. Some other well-known collegues also got their degree in this year, for example Ágoston Körmendy, Imre Kabai and Ferenc Sidó.

A year later, the Faculty of Military Engineering set up another car themed department, which was led by Sándor Bartalomeidesz, an engineering colonel. This was the Department of Armored and Motor Vehicles.

A few years later, the Faculty of Transport Engineering became so strong that in 1961 it was considered timely to set up its own automotive department.

Zoltán Lévai was commissioned to organize the Department of Motor Vehicles. In 1968, the year following the union of the two technical universities in Budapest, the vehicle engineering training of the Faculty of Mechanical Engineering was transferred to the Faculty of Transport Engineering together with its specialist and departments.

In 1969, the two car department in the faculty, were merged. This partially happened because Professor Jurek was 65 years old at the time.

This era ended in 1995. The faculty council abolished the Institute, and the departments “regained” their independence.

By the way, in addition to the ones mentioned earlier, Professor Lajos Ilosvai (1979 – 1986) headed the department of motor vehicles for a while (during the time of Zoltán Lévai’s dean’s office and institute directorate).

In 1994 when Professor Lévai became 65 years old, László Palkovics, who founded the research and development institute of Knorr-Bremse Kft., became the new Head of Department. However, in 2002, due to his long-term employment abroad, he did not request an extension of his term.

The new Head of Department was Gábor Melegh, who was also a student of Professor Lévai, just like László Palkovics was. Gábor Melegh was an internationally recognized forensic expert.

It is not possible to list here all the lecturers who have ever worked in the department, but we remember the names of those who have already left the ranks: Gábor Bánhidi, Jenő Bujtor, Kálmán Dezső, Sándor Gellérthegyi, Zsigmond Habuda, László Hodvógner Fauszto, Imreh Sándor, Sándor Imre, Ternai Zoltán, Terplán Sándor.

The history of Automotive Engineering Training
Scroll to top