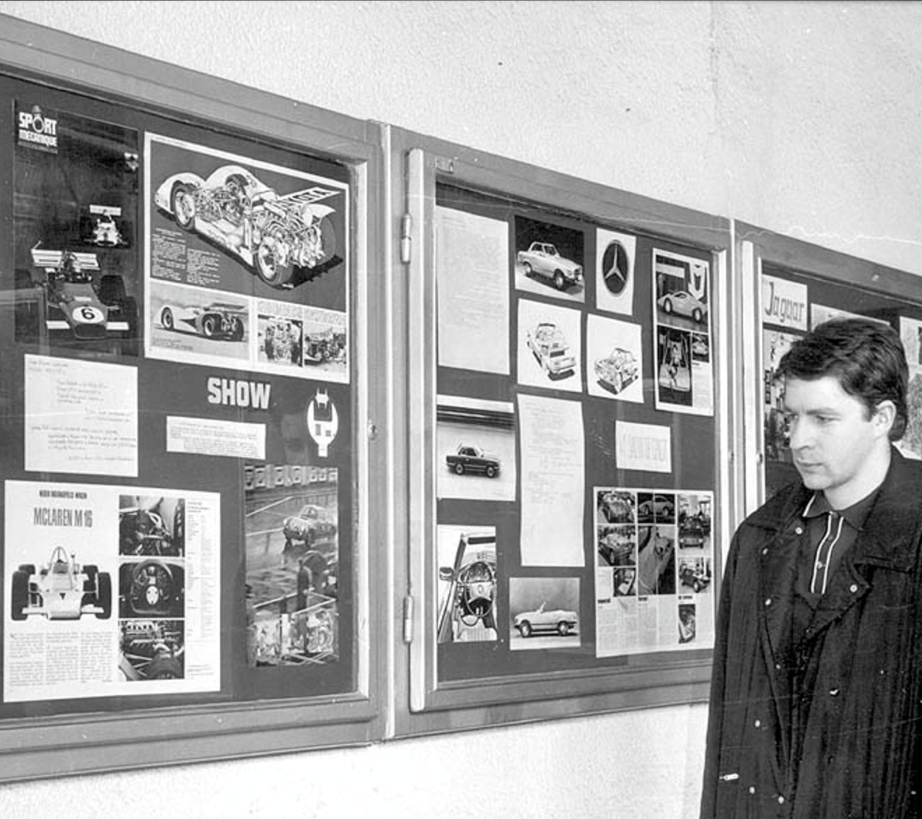 Unfortunately, we do not know much about the initial period of the Hungarian automotive engineering training. One of the few available information about pre-world war times is that the topic already occurs in the 1898 curriculum: “it allowed students to experiment with gas engines” (Zelovich: The History of the Josephine Technical University…).

Between the two world wars, the ‘Cars’ subject were included as a non-compulsory subject. After the 1940s, the subject was titled ‘Gas Machines and Cars’. The lecturer was probably Ede Kund.

Over the last fifty years, the content and form of education and training have changed a lot and generally evolved.

The next available information about a subject with a topic about vehicles is the ‘Gas Machines and Cars’ subject in the second semester of the 1946-47 school year. We can find the subject in the timetable of the A and C sections of the mechanical engineering class. This was taught by Ede Kund 4 hours a week in III. grade spring semester. He also continued in the next semester in 4 hours a week, which and this also included 4 hours of practice. We do not know the nature of the practice, it could be drawing or laboratory as well. It is interesting to note that Kund Ede also gave “unscheduled” lectures on Road Accident Prevention 2 hours a week in the IV. grade. It is likely that this subject was renamed Automobile Accidents two years later.

With the establishment of the Department of Transport Engineering, including the road group, the number of car themed subjects increased. Many older colleagues may remember the ‘Automotive Electrical Equipment’, ‘Car Experiments’, ‘Vehicle Technology and Materials Testing’, and ‘Garage and Service’ subjects. In addition, military engineers include also had ‘Tracked Armored Vehicles’, ‘Tank Repairs’, ‘Armored Vehicle Design’, ‘Off-Road Vehicles and Towing’, and more similar subjects. It is no coincidence that at that time there were 40-50 hours of student workload per week.

At the Faculty of Transport Engineering, specialists were trained for transport. The curricula were quite different, and the changes in it were much more profound. The first curriculum even included subjects such as Geodesy and Geology. These were soon discontinued, but there was still a significantly higher proportion of organizational and economic curricula. Nevertheless, the total number of hours of mechanical engineering, i.e. automotive subjects, was higher here. This was due to the fact that the choice of the specialization had already taken place at the time of admission, and the basic and foundation training could have been more purposeful.

Later, “early” specialization also provided an opportunity to resolve the over-concentration of subject teaching in the upper grades, and their education could be spread evenly throughout the five years. Interestingly, this did not exacerbate the disadvantages of specialization, as the teaching of general, abstract theoretical subjects also shifted upwards. Because of this, the students’ perspective did not narrow.

This associative curriculum structure, as opposed to the deductive one, also provided an opportunity for some students to graduate with a plant engineering degree after three years of training, similar to the training in chemical engineering. The plant engineering graduates who have graduated most successfully from college could also join the fourth grade without losing a year and obtain a university degree. According to the “quasi-two-stage curriculum” introduced in the fall of 1978, a total of 13 grades were graduated.

The curriculum, which was introduced in the autumn of 1991 restored the deductive structure, so the possibility of separation or involvement was eliminated. This was the case when both society and government demanded this “merit-based” selection, which is particularly favourable in terms of raising the desired level of requirements for a university degree. To meet this need, the government has recently joined the so-called Bologna Convention, which calls for serial, two-stage training.

In the autumn of 2006, the Faculty of Transport Engineering launched the bachelor training under the new system. Unfortunately the BSc training was not based on the English model but on the American one. This means that the teaching of the specialization subjects only started at the last (6th and 7th) semesters in a minimum number of hours.

At the same time, mechanical engineering training at the Faculty of Transport Engineering was abolished. All graduates receive a degree in transport engineering, in which only the name of the specialization indicates the nature of a mechanical engineer: vehicle technology, which will include the professional block of motor vehicles.

Details of the new form of training can be found on our Education page.